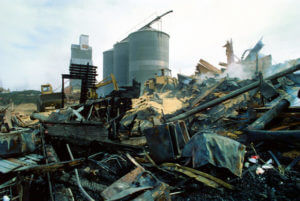 To answer this and other combustible dust-related questions, we spoke with several safety experts (including one former OSHA inspector). Here’s what they had to say about OSHA’s latest move and what companies should do now.

What will change as a result of OSHA abandoning its combustible dust standard?

The opinion is unanimous: Nothing. Every expert we spoke with said that nothing will change. And they all urged companies to continue to develop and implement their combustible dust safety programs.

Let’s look at the reasons experts believe OSHA’s move won’t make much of a difference.

Although some have interpreted OSHA’s move as a regulatory rollback, it isn’t really. A combustible dust standard had been in the works since 2009, but it was never finalized.

However, the Combustible Dust National Emphasis Program (NEP) has been in force for several years, and the July announcement doesn’t change this.

Ashok Dastidar, Vice President of Dust & Flammability Testing and Consulting Services at Fauske & Associates told us: “OSHA has been using the NEP to litigate facilities that perform below industry standards, and that will remain. Whether or not OSHA has a standard doesn’t matter either way. Companies are still concerned because OSHA is still knocking on the door using the NEP to enforce proper combustible dust protocols.”

Jason Reason, Senior Vice President at Lewellyn Technology and a former OSHA inspector, notes that the NEP isn’t the only standard OSHA can use to issue citations. “What people forget is that there are still about 20 standards that apply to combustible dust. In fact, the #1 citation for combustible dust is 29 CFR 1910.1200: Hazard Communication for Toxic and Hazardous Substances, which requires companies to train employees on the hazards they work with.”

OSHA can also issue citations under the General Duty Clause which Dave Tomecek, Senior Fire Protection Engineer at Jensen Hughes, calls “a minimum community standard by which to judge the potential for harm.”

It’s also important to remember that many states operate under OSHA state plans, which can be even stricter than federal OSHA. Reason notes: “Several federal OSHA states are tough on combustible dust right now (e.g., Illinois, Ohio). We’re also seeing a lot more states — like Kentucky, Tennessee, and California — taking this hazard very seriously, and rightly so. California OSHA has its own combustible dust standard.”

Finally, Reason cautions companies to be vigilant, because the workforce is getting more educated and making more complaints to OSHA specifically about dust hazards in their working environment. Beyond that, even when inspectors are responding to a non-dust-related complaint, the NEP instructs them to expand the inspection if they see a serious hazard. So, it’s possible that an inspector could arrive at your facility because of an employee complaint about a dirty bathroom, but end up writing you a citation because of combustible dust.

One thing that many companies don’t realize is that OSHA isn’t the only regulatory game in down. Building and fire codes also apply, and these are largely based on National Fire Protection Association (NFPA) codes. Just last month, the 2018 version of the International Fire Code was released, requiring compliance with NFPA 652: Standard on the Fundamentals of Combustible Dust.

Compared to OSHA, building inspectors and fire marshals have more immediate, and potentially more devastating, recourse if they see a problem.

“Fire marshals and building inspectors are becoming more knowledgeable about dust explosions, and they’re holding facilities to a higher standard,” Dastidar said. “The difference between an OSHA inspector and the fire marshal is that when an OSHA inspector issues a citation, it can take 6 months to get things going. Often, there’s litigation, but that’s as far as it goes. But, if the fire marshal finds something your facility isn’t up to scratch, they’ll put a sticker on the door and shut you down.”

Tomecek provides more context for the discussion about building and fire codes: “Since 2000, both the ICC [International Code Council, which issues the International Building Code and the International Fire Code] and NFPA require the issuance of operational permits for dust hazards, for everything from major industrial operations to small business and startup facilities. The issuance of an operational permit means that a facility must not only comply with standards upon construction, but also on an ongoing basis and must continue to demonstrate compliance on a frequency determined by the local jurisdiction.”

Insurance companies are leading the charge

Because compliance is a hot topic, we tend to focus on government regulations. But Reason says that in many cases it’s the insurance providers that are pushing companies to take action on combustible dust. Why? “Because they’re sick and tired of the losses. If you’re lucky, you just blow up your dust collector.” If you’re not lucky, your building can be leveled to the ground, not to mention the potential fatalities.

Reason notes that several big insurance companies now require facilities to perform a dust hazard analysis (DHA), which is one of the central tenets of NFPA 652. He’s also seen medium-sized insurance companies starting to adopt this requirement. “Basically, they say, ‘You do a DHA and we’ll figure out what recommendations to implement. If you don’t do it, we’re pulling coverage tomorrow.’” For companies that haven’t yet taken the initiative to have their dust tested, that’s a pretty tight timeline.

Was an OSHA standard a good idea in the first place?

One of the questions that arose during our interviews was whether the OSHA standard was necessary in the first place. Here the experts had slightly different takes.

He believes that continuing to rely on NFPA codes is the best plan, especially as building and fire codes transition to NFPA 652.

Reason has a different take. He thinks we’d be better off with an OSHA standard. And, in fact, he believes that in a few years the standard may be on the table once again. “It’s the wild, wild west out there because there are 50 standards that apply to combustible dust (building codes, fire codes, OSHA, NFPA, FM Global, etc.). And these standards are updated every 3 years. With this many standards, there will always be people who misinterpret them, don’t use the right ones, miss one, and so on.”

Regarding the idea that a standard would effectively “lock in” the regulations, he identifies two ways OSHA standards can evolve that don’t require an act of Congress:

What should employers do now?

Jeremy Lebowitz, Jensen Hughes Vice President of Development, Industrial, said: “We are seeing a steady increase from industry to proactively head off combustible dust hazards, irrespective of potential code adoption dates. A facility handling combustible dusts may have a fire, deflagration, or explosion hazard – regardless of what standards are on the books.”

Dastidar echoed this sentiment: “Ultimately, if you don’t mitigate a dust hazard, you will have an explosion at some point in the future. OSHA removing the standard doesn’t mean the problem goes away. Imagine if your municipality removed stop signs. You’d still have accidents if people didn’t stop.”

Finally, Reason put it succinctly: “My clients are not so concerned about OSHA. They just want to do things the right way.” That means doing everything they can to mitigate the risk of combustible dust.

Thanks to all of these safety experts for sharing their views. Over the next month, we’ll be publishing follow-up articles that look more closely at combustible dust hazards and prevention. To get this content delivered directly to your inbox, sign up for our newsletter on the right sidebar of this page.