In 2013, the need for a general industry combustible dust standard was on the CSB’s “Most Wanted” list. The CSB identified 281 combustible dust incidents between 1980 and 2005 that led to the deaths of 119 workers, injured 718, and extensively damaged numerous industrial facilities.

The issue made an appearance on OSHA’s 2014 agenda. However, the standard was later downgraded from “pre-rule” to “long-term action.” Earlier this year, the Chemical Safety Board (CSB) urged OSHA again for a combustible dust standard after a U.S. Ink fire report. 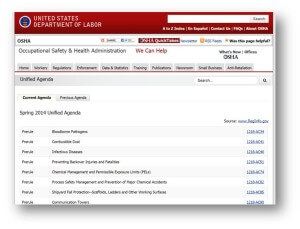 The current OSHA Combustible Dust National Emphasis Program (NEP) contains policies and procedures for inspecting workplaces that generate and handle combustible dusts. The NEP also encourages inspectors to refer relevant NFPA standards for hazard recognition and abatement methods. Fines may be levied as a result of a violation.

Some sample inspection questions include:

To learn more about recent regulations and recommendations for handling combustible dust, watch Combustible Dust Mythbusting: The Facts You Need to Stay Safe